We’re only half way through January and at a point where most people’s New Year Resolutions are still in operation and some good intentions remain. Over the next few days and weeks, though, we would normally expect to see gym memberships becoming steadily more redundant and the odd desert creeping back into the diet.

However, it isn’t all torture and restraint, we believe that the key to healthy living can be as simple as changing your normal brew.

January is always a big month for Green Tea sales, as people look to aid their body’s recovery from the indulgence of the festive season, cleansing and revitalising themselves with an antioxidant-packed brew. So we thought now would be a great opportunity to delve into the history of Green Tea.

You may or may not know that all tea originates from the same plant species, Camelia Sinensis and is grown and produced all over the world. All different types of green tea are produced in India, New Zealand, Japan, Sri Lanka, China and, of course, Kenya, with the soil, environment and climate all having their own impact on the flavour.

According to legend, tea was discovered by a Chinese emperor around 5,000 years ago. The story goes that he was boiling water to drink, when suddenly a huge gust of wind blew leaves into the boiling water, producing a muddy coloured liqueur. After much reluctance to taste the mixture, the emperor eventually discovered a very fragrant aroma, and from this, green tea was born. For this rather fortunate accident, mankind has been forever grateful!Since then, the process has become significantly more refined and all of our green teas are pure, dried without fermentation, locking in the antioxidants and intricate flavours. 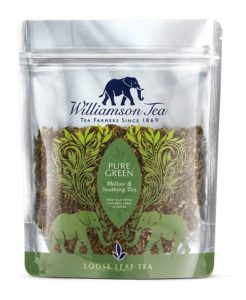 Our newest Pure Green Loose tea has a mellow and cleansing taste that simultaneously revitalises and soothes much like the calm after the storm actions happening on our Tinderet farm.

This beautiful farm, known as the ‘place of lightening’, is often illuminated by the powerful storms. As the leaves of the green tea are hit by the rain in the evening sunlight, they develop a smooth, characteristically aromatic, clean and crisp tea that’s packed full of with antioxidants.

These antioxidants are just one of the many suggested health benefits of green tea. Labelled as a superfood, many claims it aids many ailments and Green Tea has gained popularity amongst tea lovers, health and fitness experts all over the world.

Purple Tea is a naturally occurring variety of the Camellia Sensis that was located on the rich volcanic mountain soils near to Mount Kenya. The variety was developed further by the Kenya Tea Development Authority and is receiving huge interest in the health and wellbeing market due to its high levels of beneficial antioxidants. We …
Read More

First Lady’s Half Marathon In Support of ‘Beyond Zero’

The Williamson Tea team in Kenya proudly took part in the recent First Lady’s Half Marathon in support of the ‘Beyond Zero’ campaign, which is part of an initiative to promote the control of HIV and new born child health in Kenya, as well as encourage healthy lifestyles. The costs of all the registrations were …
Read More

We all know how good tea is for your wellbeing which is why we’ve teamed up with Liz Earle Wellbeing magazine to offer an exclusive gift with subscription. The lucky recipients will get a stunning Painterly Elephant tea caddy, inspired by the cool colours of the Kenyan winter and filled with iconic Williamson Tea Earl Grey …
Read More

To make this site work properly, we sometimes place small data files called cookies on your device. Find out more.