At the moment the world is highly dependent on fossil fuels for energy. There are three major issues which make this unsustainable. First, fossil fuels are very expensive, and only rising in price. Second Fossil fuels are finite and will eventually run out. Third and perhaps most importantly, they release large volumes of Carbon Dioxide into the atmosphere, causing climate change and hazardous weather. They are not a long term sustainable solution for the world.

Solar Power is simple, clean and cost effective. Unlike Fossil fuels, the sun’s energy is guaranteed as the sun shines every day and will never run out. In a single hour the sun transmits more energy to the earth’s surface than the world uses in a year!

Commissioned in May 2014 our Solar Park at Changoi is the first utility scale solar farm in East Africa. The size of the park is approximately 1.5 hectares, producing 1MWp, which means it produces 1,6000,000kWh of electricity per year. To put this into perspective since just 1kWh is enough to boil water for 40 cups, this system could boil enough water for every Kenyan to enjoy a cup of tea and maybe a second too! 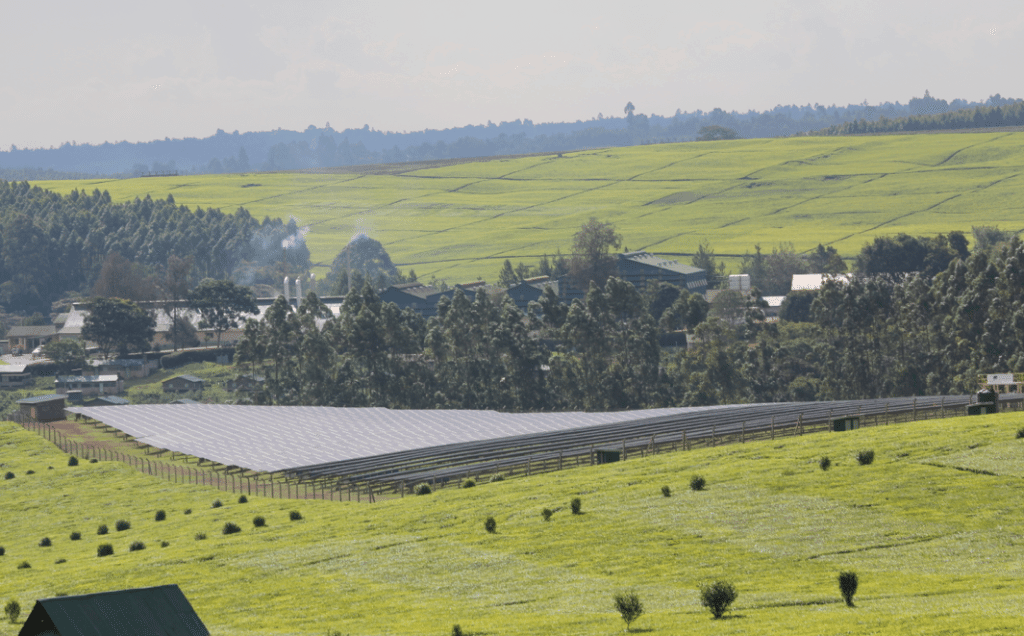 Africa is not only the ideal location for tea but also for solar electricity too! Located on the equator where the sun is high in the sky all day, provides great conditions for getting the most out of a solar system, with 12 hours of daylight every day.

Not only does this renewable energy source play a significant part in meeting Kenya’s growing power demands, both large scalar and small scale potential in Africa, but the solar industry creates jobs for skilled workers and labourers too. On Changoi about 60 people were working on site during construction with other involved with logistics in Nairobi.

The solar power system has been built as part of Williamson Tea’s commitment to sustainable farming and a greener future for tea production. The electricity produced at Changoi will prevent an estimated 20,000 tonnes of Carbon Dioxide from entering our atmosphere over its lifetime and the ystem provides enough power to enable the Changoi factory to run from solar produced electricity during daylight hours, enabling a massive reduction in energy use.

BECAUSE GOOD TEA MATTERS… Your passion for good tea helps us to continue developing our sustainable farming, quality tea and supports the partners we work with through the Williamson Tea Foundation. Together we will continue making an impact from bush to cup.  All of us at Williamson Tea are proud of the relationship with our …
Read More

A fantastic review of our delicious Earl Grey with Blue Flowers and Lemon Sunshine Loose Leaf Teabags by Tamsin-Elizabeth aka “Peaches & Bear”. http://www.peachesandbear.co.uk We’re so pleased that our ‘Bush to Cup Transparency’ and commitment to sustainable farming is beginning to become noticed. It really does stand us apart from other brands and is …
Read More

Start The Year With A Natural Cleanse

Williamson Tea would like to wish you a very happy and healthy 2017. A new year often starts with great fitness, health and gym resolutions, which if you’re like us have fallen by the wayside come the end of January. However matcha is a great and easy way to add a bit of ‘health and …
Read More